This is the nevisFIDO documentation.

The Reference Guide is available as PDF only.

In 2018, the most common authentication method is the password. This is surprising as passwords are among the weakest authentication methods on the market. Passwords can be easily stolen, shared or forgotten. Users avoid to choose strong passwords or use the same password for multiple applications out of convenience. In 2016, the Verizon Data Breach Investigations Report pointed out that 63% of confirmed data breaches involve the use of weak, default or illegally obtained passwords. An additional problem arises from the fact that passwords are stored on servers. This makes servers an attractive target for hackers. A single vulnerability on a server potentially puts millions of user credentials and other sensitive personal data at risk. If passwords are transferred through networks, they can be exposed to phishing attacks, too.

And passwords are not just insecure. They also provide a bad user experience. Increasingly often, users are forced to choose complex passwords including a combination of characters, numbers and symbols, which the user cannot remember by heart. Additionally, users are advised to have a different password for each application. In the end, one in

Several authentication schemes have been proposed to overcome the shortcomings of passwords. Amongst them are one-time passwords, security tokens or biometric schemes. However, the vast majority of those schemes falls short of expectations either with regard to security or to convenience. This is where NEVIS Mobile Authentication comes into play, as it combines secure authentication with a positive user experience.

To make authentication more secure and convenient, there is a growing need for a solution that:

The setup conforms with most data privacy regulations and helps eliminate user concerns about personal data stored on a server in the cloud. In case of a successful attack against a server, the attackers can only obtain the public keys, which are meaningless on their own and not considered to be secret in any way. Due to this, the server-side is no attractive target for attackers anymore and man-in-the-middle/man-in-the-browser or phishing attacks can be prevented.

How does it work?

Even if an attacker manages to somehow obtain the users fingerprint or pin code he won't be able to impersonate the user using a different mobile device.

In the out-of-band scenario, a user uses one application but requires another, separate mobile application to do authentication or transaction confirmation.

An example of an out-of-band scenario is a user who visits a web application via the browser installed on his personal computer (no.1 and no.2). If required, the web application triggers an authentication or transaction confirmation for the user, by sending a push message to the mobile device associated with this user (no.3). The user authenticates in the device (for example using fingerprint) and the device signs the authentication request or transaction information and returns the result to the server (no.4). After successful verification on the server-side, the user is considered to be authenticated or the transaction to be confirmed. The figure [Out-of-band authentication] illustrates this scenario.

To implement the aforementioned features, NEVIS Mobile Authentication is based on the FIDO UAF 1.1 standard. FIDO is a set of specifications for strong authentication. The FIDO Alliance was launched in 2013 to address the lack of interoperability among strong authentication devices and the problems users face creating and remembering multiple usernames and passwords. There were more than 260 alliance members by the end of September 2016, including leading internet companies such as Google and Microsoft.

Once the user has registered his device, the online service can request an authentication from the registered device. As depicted in the figure [FIDO Login Process]. 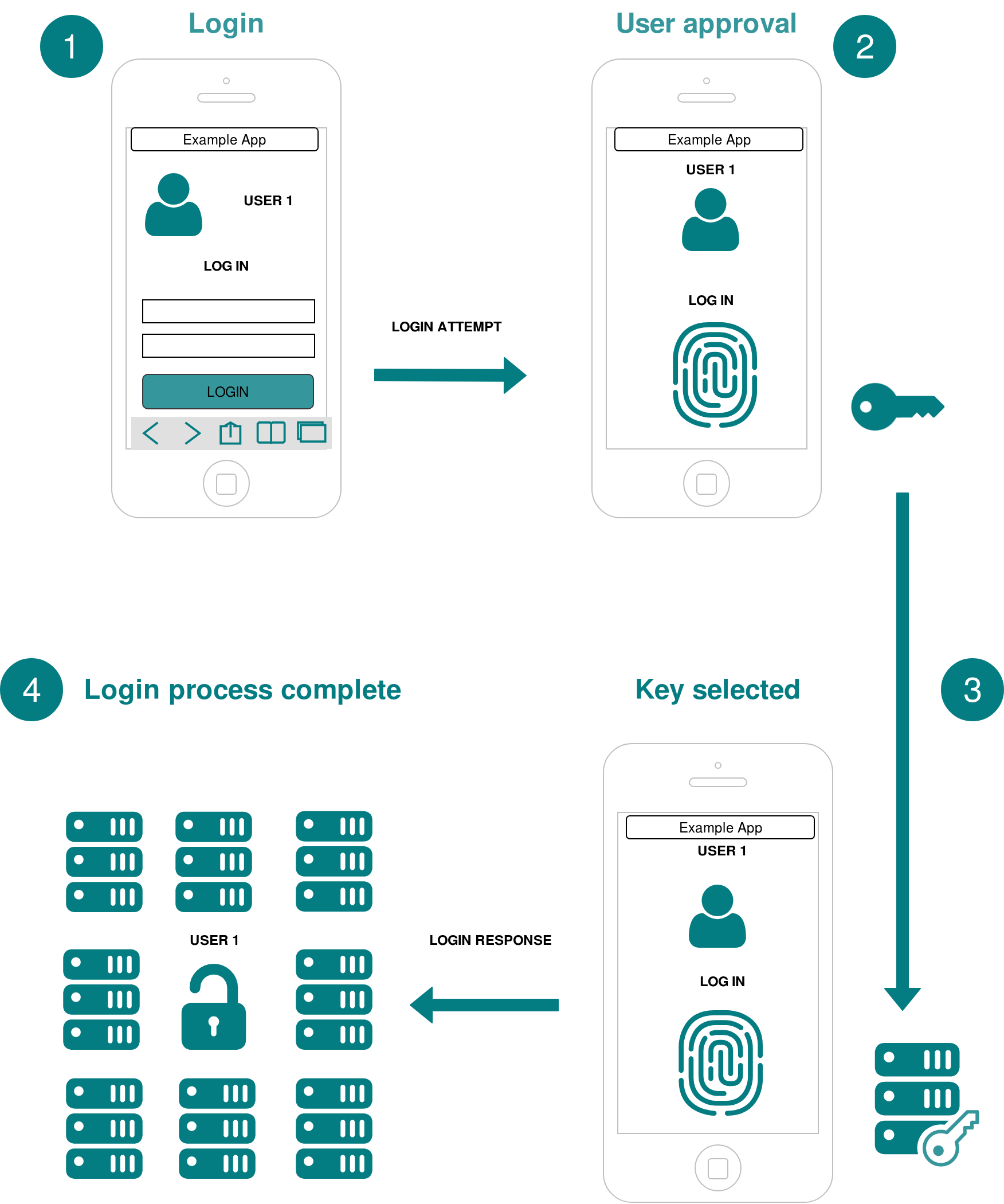 Besides authentication, the FIDO UAF protocol can also be employed to confirm high-value transactions. In the transaction confirmation process, the server sends a challenge to the client device. In response, the user unlocks the FIDO authenticator using the same method as the one used at registration time, the challenge is signed with the now-unlocked private key, and the signed challenge is sent back to the server. The FIDO server verifies the signed challenge with the public key. If the verification was successful, the transaction is confirmed.