The Nevis Mobile Authentication solution makes use of two communication channel types called the out-of-band and the in-band channel.

The following figure shows the basic concept, for both the in-band and out-of-band communication mode:

Out-of-band use cases use channels other than the main communication channel for sending messages. This makes it possible to authenticate on a separate device by delivering messages through separate channels. For example, this allows users to authenticate on their mobile devices while accessing the business application from their laptop. The supported out-of-band channels are push notifications, links and QR codes.

The Nevis Mobile Authentication SDK provides an API which is responsible for registering, updating and deregistering push notification capabilities with the Nevis Mobile Authentication backend. Any interaction with the push notification provider is managed separately by the mobile application. Typically, a dedicated SDK is used to ease integration with the provider.

The supported push notification provider is Firebase Cloud Messaging. For additional client-relevant documentation regarding the integration of FCM into a mobile client application, see the Firebase official documentation.

Out-of-band operations using links enable mobile-only scenarios. The user clicks a link in the mobile browser or a separate mobile application, which then opens the mobile application using the Nevis Mobile Authentication SDK. Similarly to the QR code, the SDK is able to process the payload presented as part of the link.

The following figure shows both channel types and the actors involved: 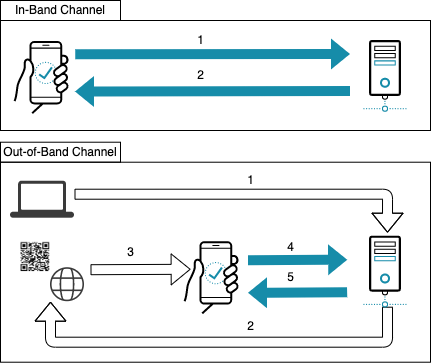 Use cases using the out-of-band channel involve additional actors. For example a laptop accessing a protected business application and a push notification provider. In these scenarios, several other systems already communicated between each other before the SDK and the backend initiate their first interaction.